The Right to Special Protection - Interviews

Opening a conversation in the classroom about sexual abuse among the rural school learners in the Tzaneen circuit is no big deal, in the view of Lazarus M, a Tsaneng Combined School educator. 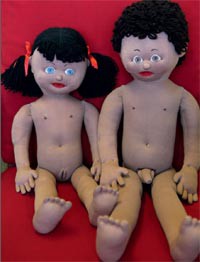 "They were not shy but, yes, some were emotional," said Lazarus. "If the conversation came easily, it was because children were well informed, and it should not be assumed they are writing about their own experience."

This educator's insistence that the children were not writing from experience is not convincing in light of many of the entries received. For instance, Piet M, writes, 'everything is about child abuse in South Africa'. He writes that children, regularly abused at home, seek shelter from their wicked parents in the streets, which ensnare them in criminal activity. He asks, 'What is worse? Is it to be subject to your father's sexual demands or to hunger?' He answers: 'They (girls) are afraid of their fathers because if you and your mother got pregnant from the same father, who is your mother's husband, that is not a good idea.'

Reading between the lines of the bruising prose that made it to the top 200 competition entries, it does appear that the writers have an intimate understanding of the topic, and knowledge of their rights. The tip of this iceberg reveals a society in a state of moral meltdown, where 'child abuse, the silent war, is basically a war going on in a child's heart all by themselves, no one able to help because no one knows.' This is according to Tino G, who is the author of a moving essay that explains, '… Unfortunately, the most common form of child abuse is sexual abuse. When innocence is stolen from a child, in most cases it is not a stranger, it's the friendly neighbour or uncle. Most children never confess to this type of abuse because they are embarrassed or because it's their fault or they feel it might push them further away from the one thing they need: a family.'

Reading the combined contributions of the winning entries is a dispiriting exercise. Anna P9, urges, 'Every child has the right to live and you should not be killed, but punished.' This entry is among several that revealed punishments that adults visited on children behind closed doors in the Tzaneen community.

When Portia R10 informs us that 'a child is a person and not a sub-person' and Lerato M11 writes, 'I'm tired of hiding my feelings, so much so that it makes me feel sick up to the ceiling,' it makes the continuation of such initiatives as this competition and the work of such foundations all the more urgent. Although the ProGroup Foundation sent the competition entries to all schools in the area, it was the economically deprived schools that seized the opportunity to open the essential conversation.

Stories about the war that is ravaging the lives of children do not make for easy reading – and the essay and drawing competition on the subject of sexual abuse lets us in on a shattering world that we ignore at our peril.