The Right to Equality - Interviews 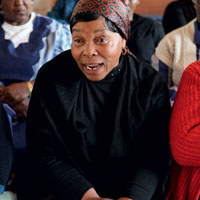 The word "widow" is a burden in some cultures and as a widow herself, Elizabeth M has felt its sting. She has taught women in Khulumani Support Group's rights education workshops to tell their stories and "to unfold their own power".

"When your husband dies, your in-laws say you are the killer of your husband and you are looking for the money in the firm where he was working and they make people hate you," says Elizabeth, who comes from Sebokeng. "When you are a widow, you get in the taxi and the people shift because you are wearing the full black attire. Your in-laws make you wear it. They throw you out of the house and take everything in the house and say you came with nothing and it belongs to their child. You, in your heart, you love your in-laws but they hate you.

"Let me tell you my story. I married a man and we stayed together for about nine years. My husband didn't know his mother – and had no contact with her since he was six months old. We found his mother before he got sick. He died in 1981. When he was sick my mother-in-law came to the hospital and said, 'Oh my child, now he is sick because of you — you are a witch.' I said, 'I didn't know you but today you say I am a witch'.

"A day after they admitted my husband the doctors said it is pneumonia and he has a hole in his lungs. When he passed away I prepared the funeral myself, nobody helping me even during the week – my sisters-in-law and mother-in-law were swearing at me. I paid the mortuary and I bought a cow for him and hired two buses for hisvfuneral and after we filled the grave, they [his family] ate the food I had prepared.

"I had two bakkies and one car. They said, we will take these cars. She is a witch. She is married to our brother yet she is looking with her boyfriend to take our brother's money. After the funeral [according to tradition] the mother-in-law must buy a black dress for me. She did not do anything. My parents bought black material and made a dress for me. My mother-in-law said, 'I want a pinafore from the material that is left over'. I gave her the material for the pinafore. After that she came to me and said to me, 'Makgoti you know, I have a dream. I dreamt your husband said you must buy me a brown pinafore.' I said, 'No, I think you must go to the grave and ask him to buy it for you.'

"My heart is sore when they tell me about discrimination. This thing is eating me inside. I am going to collect the widows of Sebokeng and tell them these things. I am afraid to marry again. I have got a divorce from heaven. I don't want a man anymore. Many widows say same thing. They have had enough.

"Widows are not regarded as people of South Africa. They don't have a special day. I tell them about the UN Convention on the Elimination of All Forms of Discrimination Against Women. Also, we have a pamphlet from Khulumani Support Group that says, 'Widows are not children, they are decision-makers and heads of families.' " 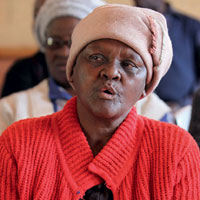 The tragic tale of how Rebecca M came to lose everything she possessed after her husband's death is known throughout Taung in North West Province. The story was told again when Lobeko T took Rebecca to one of Khulumani's Training the Trainer workshops on the rights of widows. She told her story there. After Rebecca's husband's death, the benefits from the Rustenberg mine where he had worked had been given to another woman, also called Rebecca. The second Rebecca was born into the same family as the first Rebecca and bore her identical surname. But, according to Lobeka, the first Rebecca M, who lost everything to her namesake, had no interest in learning about her rights. Once a housewife, she began trading in live chickens, on the side of the road.

Not a widow herself, Lobeko explains, "I am dealing with some people who are illiterate, who do not want to raise their voices. They are afraid to speak out. When I talk to them, some will tell you, 'This is an old story, I am trying to forget.' And so they are cross with you. People are tired and we are busy telling them not to be tired and not to forget until they speak out. "In my training sessions, I am talking about the skills so someday someone will say, 'here are my papers' – and I am able to help them with the assistance of Khulumani Support Group's head office. They don't want to … I don't know what they are afraid of."
Lobeka of course knows precisely what it is that widows fear. It is their in-laws, who "deal with the budget" for his household and buy food for his wife "and when he dies, they take his possessions and send her away".

"In the training workshops, we tell the widows what they must look out for. Before you marry a man, let them tell you what is going to happen after he has died. It is not easy because everyone is afraid of dying and they will wonder what you are talking about. I tell them to learn to write a will and that they must get their husbands to write a will. We tell them, your in-laws don't tell you the whole story of what will happen after your husband has died. It is torture. They don't regard you as a person. They force you to wear black attire according to tradition. For one year – in some cases for six months – you wear black and stay there at home in his house or yours deprived of many things."