The Right to Dignity and Equality

Although the Constitution protects women's rights to land tenure, their exclusion from obtaining land rights continues.
The Right to Dignity and Equality

CONDITIONS OF FARM WOMEN IN BRIEF

Although the Constitution protects women's rights to land tenure, their exclusion from obtaining land rights continues. In addition, most farm women have access to housing only through their spouses, who suffer the insecurity of a 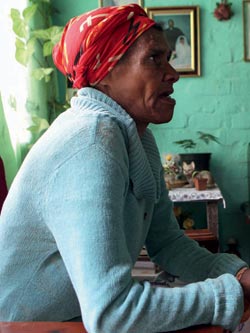 tenuous relationship with white farmers who continue to dominate land ownership. For centuries, farm women have served as chattel in a patriarchal system insulated by ignorance and the distances separating farms and social structures. Living conditions, including exposure to pesticides, are notoriously dire. Farm women live under the constant threat of eviction, surviving on low wages, most often as seasonal or casual laborers. Sexual violation by their employers and domestic abuse render farm women more vulnerable and they are often unaware of the legislation protecting their rights. They are described as "invisible"; nobody witnesses the continued sexual harassment they suffer in silence. Such perilous conditions affect all categories of farm women, including girls and young women, migrants and the LGBTI community.