People and Power comprised 6 special reports on socio-economic issues and human rights during March and April 2014. Each report featured a consultation and discussion with a community in South Africa, allowing people to express their views and have a voice on national television.

This episode focused on LBGTI rights and raised the following issues. 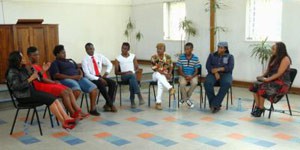 HATE CRIMES: According to the LGBTI activists we spoke to, violent attacks on members of the LGBTI community must be classified as hate crimes and prosecuted as such. This will ensure that people realise that such crimes are totally unacceptable in our country.

ADDRESSING INTOLERANCE IN STATE INSTITUIONS: In many state institutions, such as the army, official discrimination is outlawed. But lesbian and gay people still face intolerance and ridicule. This needs to be addressed.

HUMAN RIGHTS: The rights of LGBTI Persons must be set within the contact of human rights for all. There should not be a separate category of rights for LGBTI persons. Rather all human rights education and legislation should include rights to freedom of sexuality.

FAILURE TO IMPLEMENT POLICIES: A way needs to be found to monitor and measure the implemntation of policies on the rights of LGBTI persons. It is one area where the policy looks great on paper, but due to prejudice there is a lack of implementation on the ground.

LEADERSHIP BY EXAMPLE: Homophobic and discriminatory comments by political leaders should be taken very seriously. When a leader speaks in a way which is contrary to the constitution, he or she is undermining the constitution very powerfully.

CULTURE as an excuse for intolerance: Those who lead within cultural and faith communities must not interpret those cultures in a way which is contrary to the constitution. For example, there is nothing in Venda or Tsonga culture which permits rape. And yet those who are intolerant of LGBTI persons hide behind cultural norms.